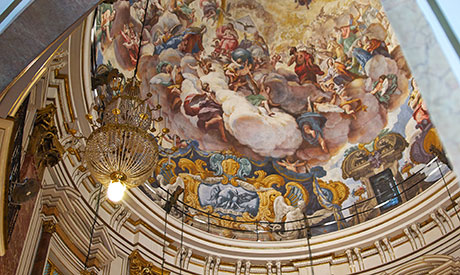 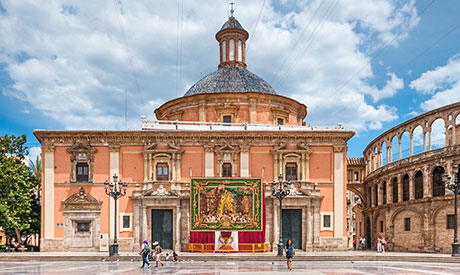 The basilica houses the shrine of the Virgen de los Desamparados, the patron saint of Valencia.

Built on the ruins of the Roman forum, construction of the basilica began 1652 and was continually added to over almost two centuries, with its final completion in1824. This long period of construction gives the building its unique blend of architectural style including Baroque, Renaissance, Rococo and Neoclassicism.

The basilica’s facade is made up of several layers, including grey stone and boasts an impressive dome. In the Chapel of Our Lady you can see the beautiful frescoes, which decorate the dome. Cordoban painter Antonio Palomino, the official painter in the court of Charles II, painted the dome’s frescos in 1701. Two of the Basilica’s doors face the Plaza de la Virgen while the other links the basilica to the cathedral through an impressive archway.

During the Las Fallas festival, the basilica’s walls are decorated in one of the most moving and passionate traditions in Spain: the offering of flowers to the Virgin. A giant wooden silhouette of the virgin is constructed and is completely covered in flowers in the offering, which culminates on the 18th March. The flowers are left after the festival to be enjoyed by devotees and visitors to the city. 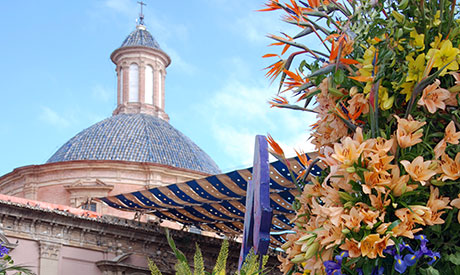 Geperudeta or Little Hunchback, is an affectionate name by which Valencia’s patron saint, the Virgen de los Desamparados, has been known since 1185. The Virgin appears with a lily in one hand and carrying the infant Jesus in her arms. Her posture is slightly inclined forward, which gives the virgin her affectionate name “La Geperudeta”. 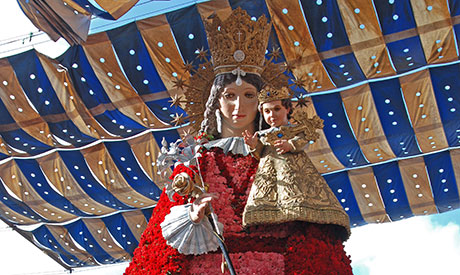 The principal ceremony held in honour of the Virgen de los Desamparados takes place on the second Sunday of May. This is the most popular celebration for the Virgin and involves transferring the Virgin from the basilica to the cathedral.

City florists honour their patron saint on the third Thursday of May, donating thousands of flowers on the last Wednesday, which adorn the interior of the Basilica of the Virgin.