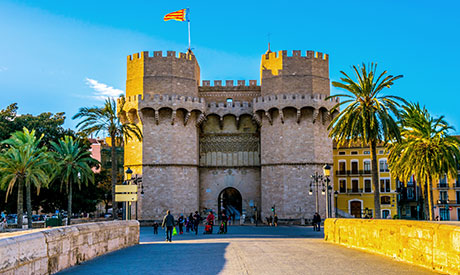 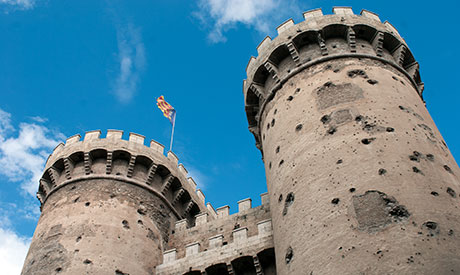 These two sets of twin city gate towers are the most tangible remains of the ancient walled city of Valencia.

These landmark defence towers protected against intruders entering the city walls of ancient Valencia. The towers have stood alone since the city walls were demolished at the end of the XIX century.

Built by Pere Balaguer, construction began on the Serranos Towers in 1392.

These imposing gate towers create an exceptional atmosphere and are a magnificent example of Gothic architecture. Visible from quite a distance around Valencia city, Serranos Towers served as a prison for noblemen from 1586 to 1887.

Monday to Saturday: 10am to 7pm (but in the winter it closes just before sunset)

Sundays and public holidays 10am - 2pm.

Free on weekends and public holidays.

How to get there:

From the bus station: 15 minutes walk or catch bus number 80, getting off at the stop in front of #771 Serranos Street. From there it’s a 2-minute walk.

From the Plaza de la Reina: A pleasant 8-minute walk through the old city centre, passing through Plaza de la Virgen and walking down Serranos Street toward the old riverbed.

Constructed by Pere Bonfill, the Torres de Quart were modelled on Castell Nuovo’s towers in Naples. Built a little later than the Serranos Towers, they display an example of late Gothic military architecture. 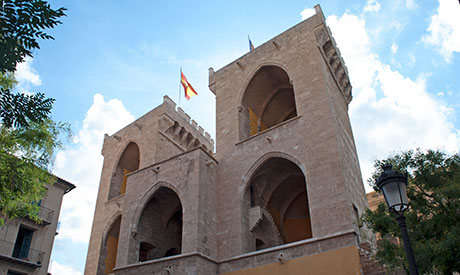 The Quart Towers were known as the Lime Towers until 1874, as lime was brought into the city via this gate during the XVII century.

For some time these towers served as a women's prison. Located in the vicinity of La Beneficencia you’ll find the towers at the end of busy Quart Street in the centre of Valencia. The towers are now the site of an intriguing collection of locks.

Monday to Saturday: 10am to 7pm (but in the winter it closes just before sunset)

Sundays and public holidays 10am - 2pm.

Free on weekends and public holidays.

How to get there:

From North Station: A 5-minute bus trip on bus number 5, or a 15 minute walk down Guillem de Castro Street.

From the bus station: 15-minute walk, crossing to the opposite side of the river (toward the city centre).