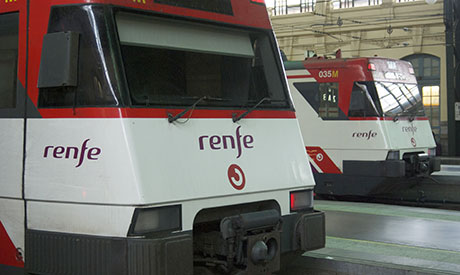 Traveling by train is very convenient and comfortable in Spain and the prices are reasonable, especially if you book online in advance.

Find more information on the English pages of the website for the train company, RENFE.

In Valencia there are two main stations:

Actually located in the city centre (not the north), here you will find trains of local and regional trains to Gandia, Mogente, Utiel, Caudiel and Castellón de la Plana, and most of the long and medium distance, except the high-speed AVE trains and some ALVIA and EUROMED servces, which leave from Joaquín Sorolla station.

TIP! For long-distance services double-check your ticket carefully to see which of the two stations you will depart from and avoid any last minute surprises!

The metro stations for the North Station are Xàtiva or Bailén

The newer, second main station. From here high speed trains (AVE) leave and arrive to and from Madrid, Cuenca and Albacete, as well as some ALVIA and EUROMED services. It is located on Calle San Vicente Mártir, about 10 minutes walk from the North Station.

TIP! There is a free shuttle bus service between Joaquin Sorolla station and the North Station, just show your train ticket when boarding.

The closest metro station to Joaquin Sorolla station is also called Joaquin Sorolla, but may still be found listed in some places under its old name, Jesus. There is also a taxi rank outside the station.

TIP! When looking for signs to direct you look for the word "RENFE" which is the name of the Spanish train company.