Costa Blanca Things To Do 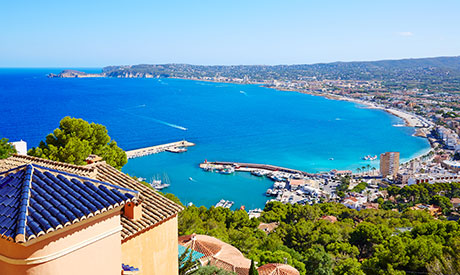 The Costa Blanca lies within the Valencian "autonomous community" - a Spanish region a little like a state - of which Valencia city is the capital. Meaning "White Coast" in Spanish, the Costa Blanca runs some 150 miles (240km) along the Mediterranean Sea between the towns of Denia and Pilar de la Horadada, all within the province of Alicante. Its largest tourist destinations are Denia, Javea, Calpe, Altea, Benidorm and Alicante. From Valencia city it takes about 1 hour and 15 minutes to drive south to Denia, where the Costa Blanca begins. Most the drive is along excellent toll motorway.

The origins of the name Costa Blanca are unclear and, although it is a Spanish name, it is not frequently used by locals, many of whom speak Valencian language as well as Spanish. Some argue the name is a reference to the area's white sand beaches and white-washed buildings, but others suggest it was simply invented by British tourism companies and airlines in the 1950s, when package tourism to Spain started to boom and marketing names were given to many parts of country's coastline.

The local tourism authority says "unforgettable beaches and coves, beautiful coastal mountain ranges and infallible sun make the Costa Blanca a paradise all year round" and you'll find many fantastic things to do in the Costa Blanca, including the boat trips in Benidorm, Denia, Javea, Calpe and Altea that we offer below. 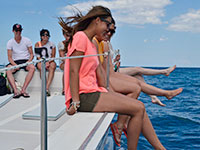 Spend some cool, relaxing time on the water away from the busy beaches, with this Benidorm boat trip departing from the neighbouring town of Altea.

Relax, sunbathe, swim, snorkel, feel the breeze, a delicious BBQ lunch and drinks from the boat's own bar.

Wave goodbye to the crowds as you head out to sea, the crew hoisting the sails for your journey.