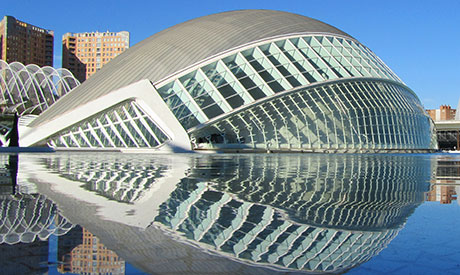 The 'eye-conic' Hemisferic building celebrates it's 20th anniversary this year. It was designed by famed architect Santiago Calatrava and was the first building in Valencia's City of Arts and Science to open its doors to the public.

Its ovoid roof is over 330 feet (100 metres) long and houses a 3D cinema with a 9,000 plus square foot (900 square metres) concave screen. It's a must-visit for lovers of both movies and modern architecture.

The local government, Generalitat Valenciana, says that in its first 20 years more than 9 million people have enjoyed more than 75 different films on its screen, not to mention hundreds of events being held under its massive opening and closing eyelid structures.

To celebrate the anniversary the outer perimeter of the eye structure is open to the public and discounted tickets are available for €5 per person for special screenings at the 3D cinema.

Check out the film schedule so you know the best time to visit.